A man's work is nothing but this slow trek to rediscover, through the detours of art, those two or three great and simple images in whose presence his heart first opened.
Albert Camus

Many many years ago, we moved to Sapporo city on the northern island of Hokkaido from winterless southern California. I remember quite clearly how the recruiter described the island as "cold as Siberia." We left sunny California on an April day and landed in Sapporo in the middle of a snow storm. It was more of a shock than I had anticipated.

It took me a couple of years to acclimate to the long winters, rainy seasons and extremely short summers. In the end, I left as a better person with loads of warm memories and the spring board for my art, that being sumi-e brush painting.

Much of what we do, can be done without thought. Automatically, we know our routines without having to stop and think about it. It's only when we step out of our routines that we're forced to think about what happened.

Working with sumi ink is all about slowing down and rediscovering those lost moments. It's doing the automatic gestures and thinking about what's happening.

I'll admit that it can be tedious. Who wants to spend several minutes making a pool of sumi ink when you can buy it in a bottle? But then I'm reminded of what my sumi-e teacher taught me: you're leaving behind the thoughts of the day and focusing on your breath, the movement of your body. You're leaning into the now.

So as I lean, I am letting my senses be my guide. I listen to the scratchy sound of the ink and notice the musty scent as the water and ink stone pool into a black, molasses liquid. I've grown to love this slowing down, the scratchy sounds of the ink stone, and the scent of freshly made sumi ink.

Place a bit of ink in one dish. With sumi-e painting, black is not just black. The amount of water and the hue of the ink will allow for variations in your painting. So you'll have the undiluted ink in one dish and a puddle of ink in another dish that you'll use for diluted hues.

Wet your brush until all the bristles are soaked and then wipe off excess water. It will take some practice to understand the relationship between the wetness of your brush, the ink, and how they will react to the rice paper. My teacher advised practicing on newspaper to save the expense of the rice paper.

In the picture above, the dish holds the puddle of ink with a few drops of added water. I am taking my brush and running the edges of the brush along the diluted ink to get a "notan" effect. The tip of the brush will have the darker ink while the upward bristles (being fuller with water) will have a greyer ink. 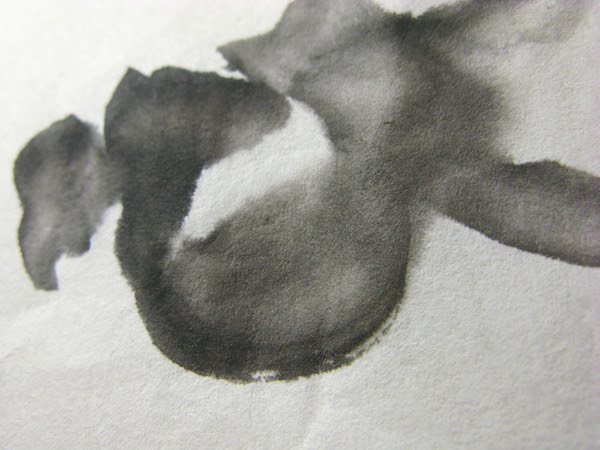 Above shows how the ink varies in color from grey to a deeper black. The center of each ink blot is a lighter grey where the upper bristles have touched. The amount of ink that meets the paper will not only depend on how much of your brush lies on the paper, but also on which side of your brush touches the paper. The side of the brush that rested in the ink in the dish versus the side that didn't are both used for painting.

The image above shows the distinct lines where I've taken a thinner, drier brush loaded with full ink to outline the fish. This is the finished rice paper painting which has been adhered to it's backing and is ready for framing.

This is just an introduction, and I think a video will help with making the process easier to understand. Stay tuned for a step by step video.